PWA vs Flutter: the right choice in 2020

Google or Google, what to choose? :)

The possibilities of modern apps are very impressive. They are new lifehacks for modern people. New platforms, new frameworks, new apps, and we have to know what is the latest news, to stay on the edge of the new technological wave, to create absolute innovations.

PWAs have a lot of benefits (and that’s why they are popular today😉).  So, read our article: “What is PWA?” and keep reading to know, what the Flutter is, and why it’s really great today! 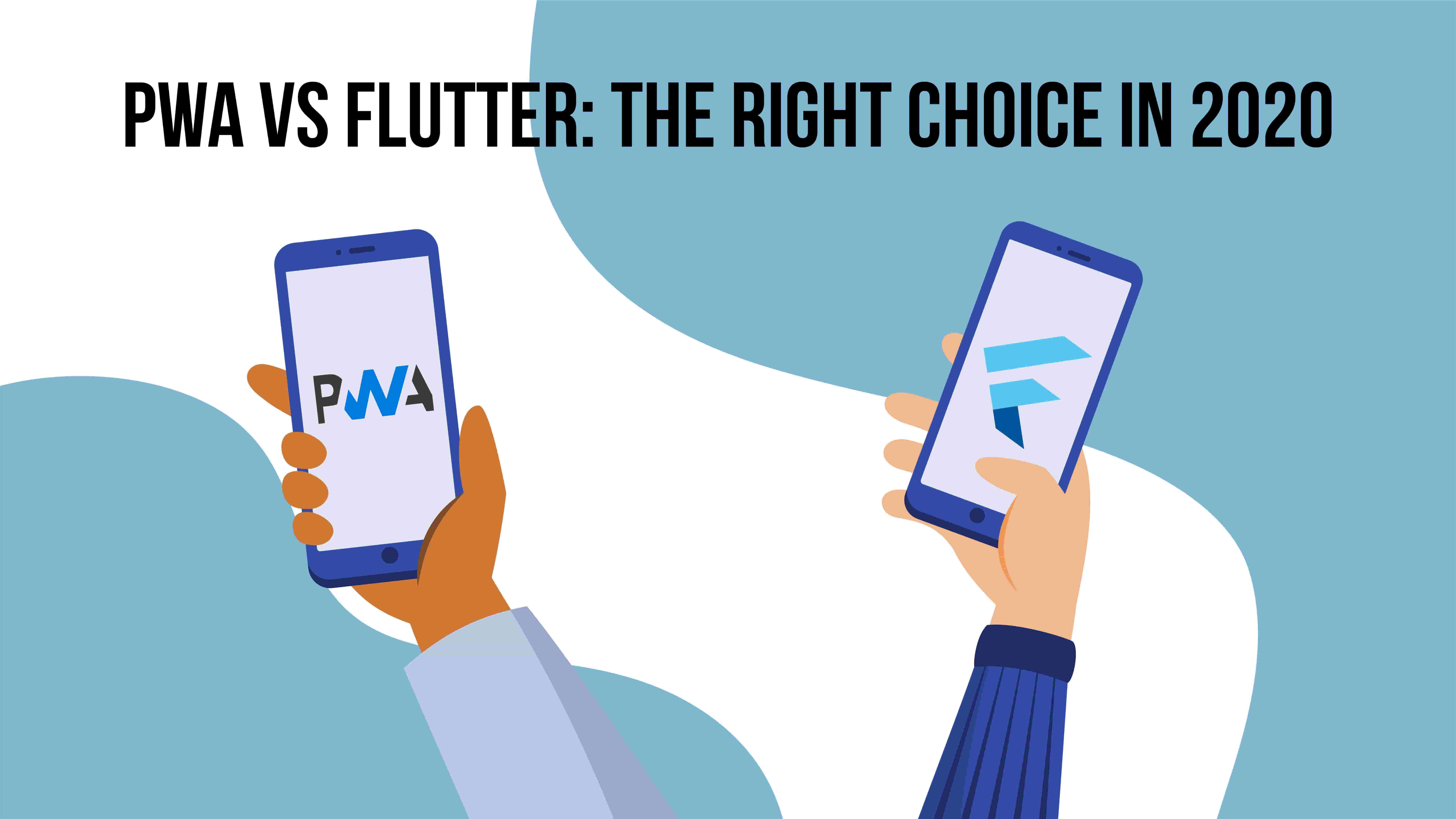 So, if you have never heard about Flutter, you have already used the apps made with Flutter.

Have you ever bought something from Alibaba or eBay, run an advertising campaign on Google Ads?

Or maybe you watch videos on Voot? These apps and others are made with Flutter.

“Flutter is an open-source UI software development kit created by Google. It is used to develop applications for  OS like Windows, iOS or Android, Mac, Linux, Google Fuchsia and the web. The first version of Flutter was known as codename “Sky” and ran on the Android operating system.”

As Google explains, Flutter is a Google’s UI interface toolkit for creating beautiful, native iOS and Android applications from a single source code base.

Google thinks about the future and the future is here. Now Flutter is to respond to the challenges of creating software for many platforms.

Google pays more attention to the resource-intensive and costly aspect of software development, namely the need to build the same application multiple times on different platforms.

Flutter – according to the giant – is to provide “native speed and accuracy of transferring” applications between systems. On the other hand, the goal is not to replace Android and iOS applications, but to provide an engine that can be used in the software. Google boasts that Flutter provides “pixel-perfect results”, which gives developers control over every pixel displayed in the application🤳.

Flutter operates based on the ARM architecture, uses the graphic layout of devices as well as APIs and services of mobile systems, including native elements of the Android or iOS interface, such as UIView in the latter. The environment works with the most important tools for creating software for mobile systems – with Android Studio and Xcode at the forefront, as well as Visual Studio Code and IntelliJ. Developers have access to code written in Basin or Java, and Swift or Objective-C.

Flutter offers the so-called stateful hot reload, i.e. it allows you to make changes in real-time without having to rebuild the code every time.

What are the benefits of Flutter?

2.Possibility to create Android and iOS apps from a single codebase.

You haven’t to rewrite code for these platforms. Single codebase allows you to release app updates simultaneously or, in other words, synchronize your work.

One of Flutter’s benefits is its own widgets. You can choose any widget with any level of customization. And these widgets will help you to create amazing mockups. The UI customization that utilizes a lot of time for a developer is quick with Flutter.

On any device and screen, thanks to Flutter, you will have a great design and view. It’s easier to create graphics or animations in Flutter, than the native iOS and Android.

These and more are possible for Flutter. But why do you need to choose Flutter?

According to the situation on the market, Android and iOS are great competitors, that try to get the biggest piece of cake, if you know what I mean. Android is still in the first place, iOS at the second, but there are no other players, that could prevent them.

So, Flutter makes it possible to play a double role and work both on Android and iOS. So, it can be a great solution for your app.

To say a word about PWAs, they are written in web languages, so they can be run on any device (from mobile to desktop). On the contrary, Flutter gives users the same experience, as in native apps.

👉If you want to read about another type of apps – RWA – and why they are differ from PWA, read our next article: “PWA vs RWA: alike but different?“👈.

👉Or, if you want to know: “Why PWAs are the future of web apps?” We have already prepared some interesting posts that will tell you “PWA vs Flutter: the right choice in 2020”.👈

So, these two solutions are great, and it’s up to you what to choose. They both have their benefits and disadvantages as well. But in 2020, you have to think about your users and create a product that meets all their requirements. So, if you have any ideas, contact us! Let’s build great apps together!