What is a mobile app?

A mobile app is something so necessary & helpful nowadays. But let's move deeper and discover some amazing facts!

What do you think of when you hear the term “mobile app?” You may recall your favorite messenger or a photo editor. And you are right. But if it is so, why do so many companies today order such apps for their clients and staff? That’s the question.

We are here to help you to find an answer to this as well as many other questions: from what a mobile app represents itself to whether it will be feasible for you to order an application for your business.

To begin, let’s clearly state what a mobile app is.😉

The easiest definition of mobile app is the following one: it is a software application designed to run on a mobile device (smartphone, tablet, or smartwatch).

Want to learn more? Just keep on reading. In this article, we will share our knowledge about types of mobile apps, their peculiarities, and their importance in business.

Some facts about the history, present, and future of mobile apps

The first apps were created to increase the productivity of users and to facilitate a number of tasks for them. Those applications were contact databases, email apps, calendars, music players, etc. 📱 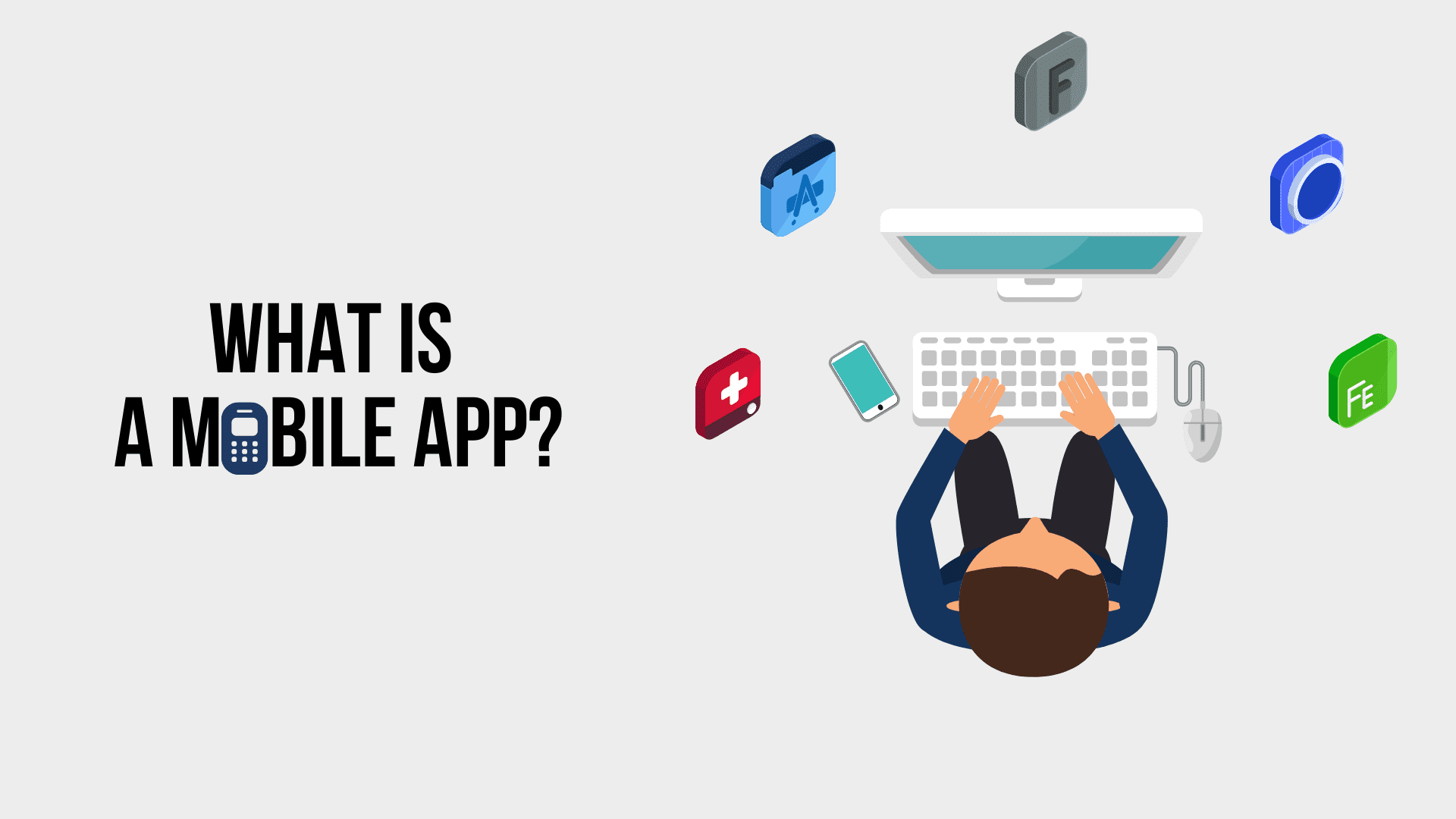 However, with the flow of time and the expansion of tech penetration, the demands of users have changed. It has led to a significant growth of types of apps. Now there are entertainment apps (mobile games), messengers, apps for tracking orders, managing your workflows, buying tickets, and many other things.

When it comes to mobile app development, there is also the question of which platform to choose. There are two mobile operating systems that will be interesting to consider in 2019. They are Android and iOS. 🤳

These two operating systems were built by different companies. As a result, they can offer different security standards and approaches to user-friendliness, as well as capacities for developers. 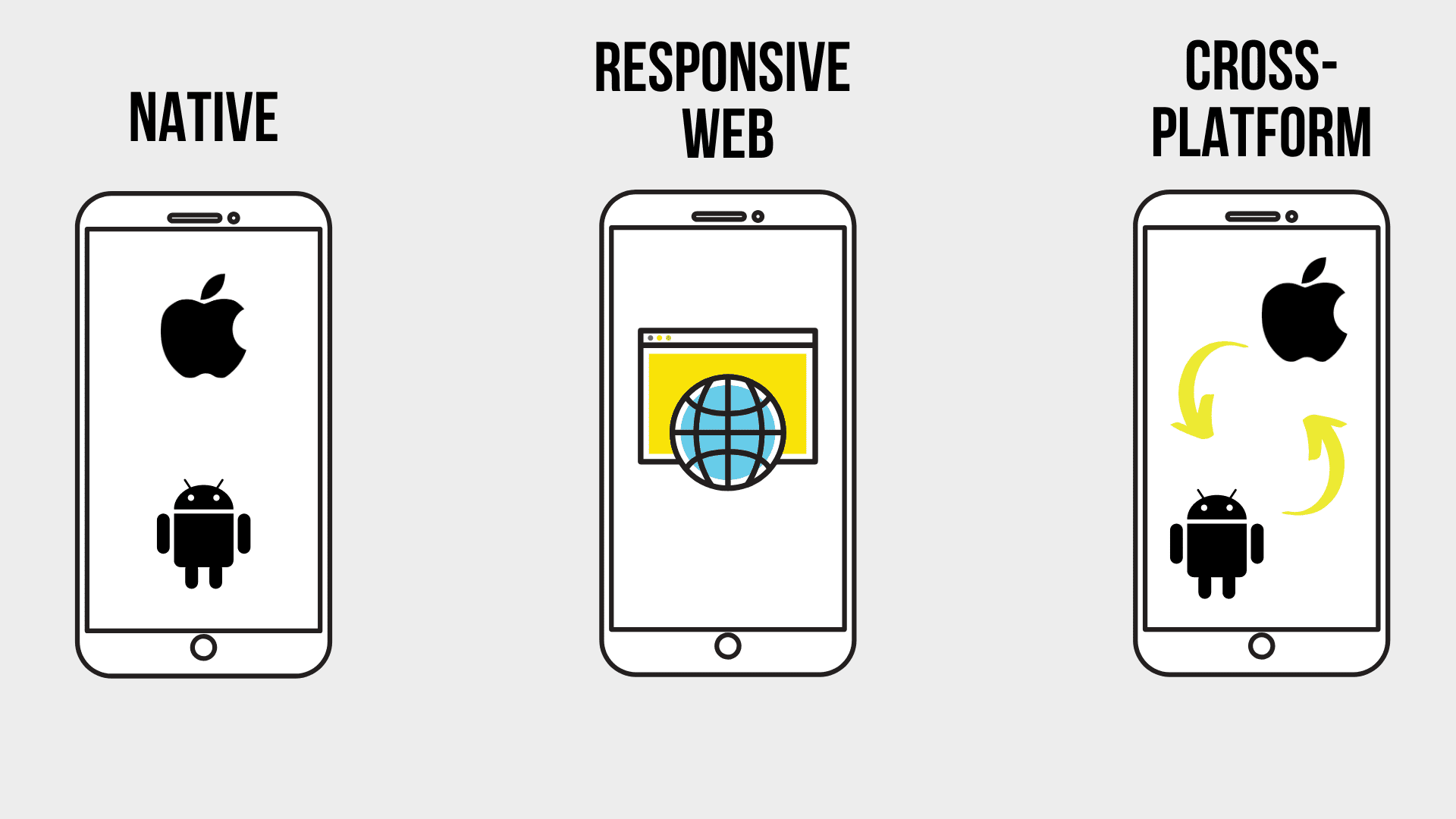 Android represents itself as an absolutely open-source mobile OS, which is based on a Linux kernel. We can’t say the same about iOS. Android OS is the most flexible of the three under consideration. It is easy to connect Android-powered smartphones to PCs in order to exchange or download files.

Moreover, there is a huge variety of devices working on Android. As of May 2019, there were 2.5 billion active Android devices in the world. This means that mobile apps written for this OS may reach the widest audience.

iOS is known to be a very user-friendly and easy to navigate operating system. It can provide exactly the same user experience across all devices created by Apple. As there is a very limited range of mobile device functioning on iOS, it is possible to ensure that all the available apps will work perfectly on all the devices. With other operating systems, it is practically impossible to do it due to the wide range of hardware.

If we are speaking about mobile app development, it is always better to choose the platform that is the most popular among your target audience. However, if you want to reach all segments of the market, it is sensible to think about cross-platform options. At Omertex, we can help you create an app of any type. To learn more about what we offer, just follow the link.

While users are accustomed to categorizing apps according to their functions, for developers, there is another classification. This classification is based on the technology used to build them (and, consequently, the ways and tools to run them).

There are three types of apps. They are native, responsive web, and cross-platform apps. Let’s explain what makes them different.

Such apps can be downloaded from special app stores like Apple’s App Store, Google Play, etc.

These apps have access to the hardware of your device and can be connected with your camera, Bluetooth, camera, etc. Thanks to this peculiarity, the functionality of native apps can be very wide.

As for the disadvantages of native apps, we need to highlight the fact that their development and maintenance require rather serious investments. Moreover, as they are intended for one OS, you need to develop separate apps for users of devices working on different platforms.

You can find examples of such apps easily in any app store. For instance, WhatsApp and Airbnb are native apps.

They run inside a browser and, in general, they are built just like a regular website using such languages as HTML/CSS/JavaScript.

It’s important to understand that you do not have to download them. To access them, you need to open a browser on your mobile device. Developers do not write separate codes for each platform. The web app is the same for all of them. That’s why the maintenance and development of web apps are rather simple and easy.

However, these apps are slower in comparison to native ones. They are less interactive and less intuitively clear. They can’t function fully offline, and it is not possible to interact with device utilities on them, which restricts the functionality as well.

If you want to know more about web apps, you may like the following article.

Moreover, we also believe that if you are thinking of launching an app, you need to consider progressive web apps (PWAs) as well. They offer a wider functionality in comparison to traditional web apps and have some native-like features, including functioning, sending push notifications, and interacting with a device’s hardware.

Examples of progressive web apps include Starbucks and Forbes.

To learn more about this type of app, you can read our previously published article about PWAs.

One more option that is in high demand today is cross-platform apps. With this variant, you do not need to develop a separate app for Android and iOS.

For businesses, such an approach has a number of huge advantages. Ordering a cross-platform app, you have the ability to reduce the time needed for the development, as well as to control your expenses.

When we talk about optimization of investments (in other words, putting your money into app development in a more feasible way), it’s also worth mentioning hybrid apps. They can be described as a combination of native app features and  web app features. Though they look and feel like native mobile apps (they may even have an icon and may work offline), they are web applications.

As they are still web apps, they are written with the help of languages such as HTML/CSS/JavaScript. But developers also use native APIs to ensure the functioning of these apps.

These apps are developed much faster and easier than native and web-based mobile apps. An advantage of these apps is that they are common for all platforms, just like traditional web applications.

These apps load really fast (especially if we compare them with native solutions). However, they are still not as fast and interactive as native apps.

Gmail and Uber are examples of hybrid apps.

We are confident that any smartphone user has quite an impressive number of apps on his/her device. That’s why it’s highly likely that you can name dozens of applications.

So we have created a list of the apps that are the most popular these days. Let’s check out how many of them you use 😎 :

How your business can benefit from a mobile app

Maybe you have already noticed that many companies, regardless of the size of their business and the industry that they are working in, have their own apps. But what does that mean? Is it just a modern tendency? In reality, having an app is not a trend. It’s a necessity for companies these days. 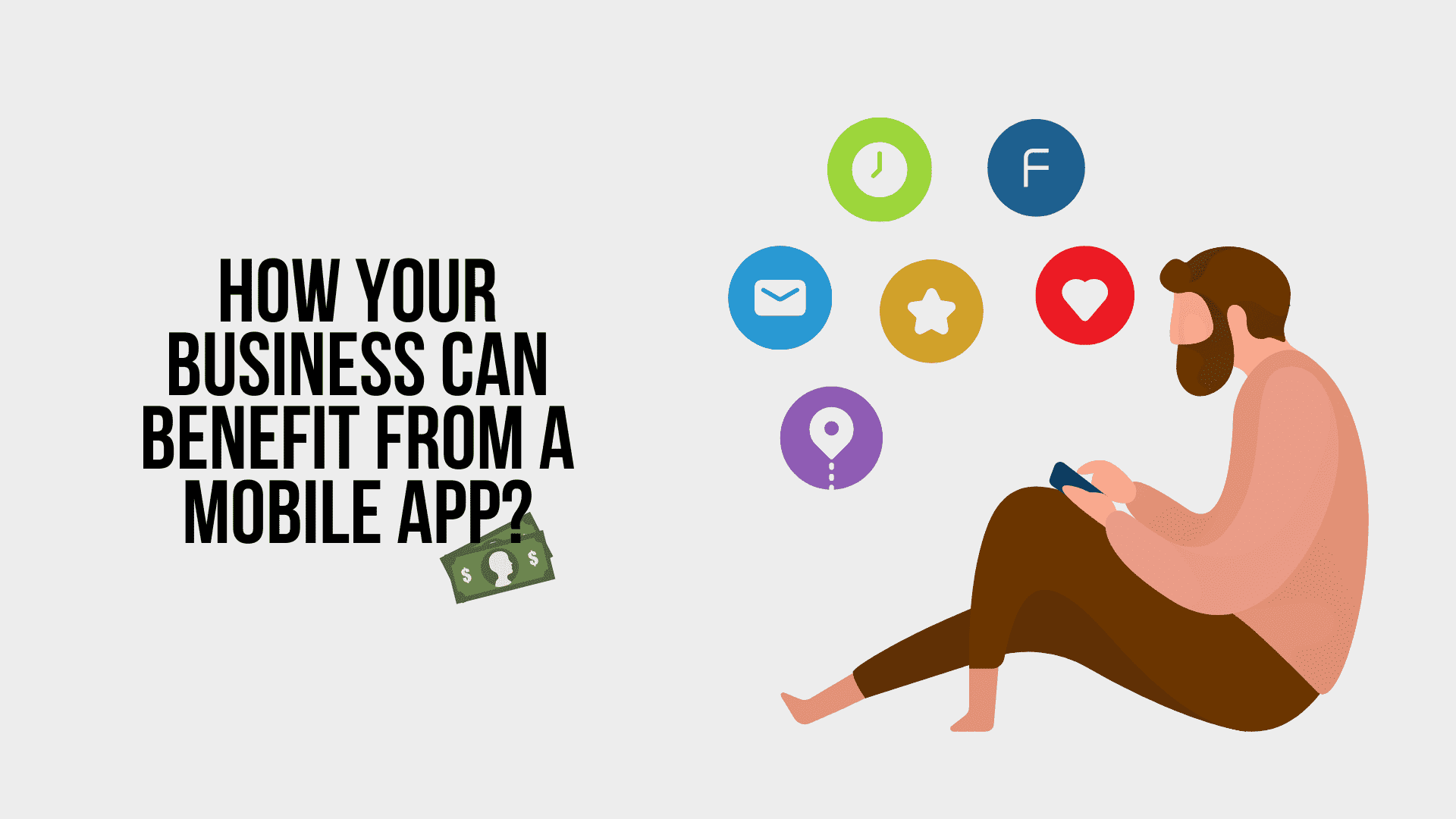 Given all the aforementioned benefits, companies can greatly improve their own performance with the help of mobile apps. And here is why:

As you can see, mobile apps have a lot to offer you and your business. Why not benefit from it? That’s what we are going to talk about further.

However, mobile apps should be important and valuable not only for businesses, but for customers as well.

First of all, an app should be convenient. It’s necessary to provide a solution that will enable a user to easily access the whole list of the company’s offers and to easily interact with it (place an order, ask a question, make a purchase, read reviews, etc.).

Do not forget that a mobile app can greatly facilitate a number of processes for users, which may have a significant impact on their customer experience.

Even if we speak about contacting an organization, via an app, it will be enough just to make one tap to phone a manager instead of dialing the whole number.

Easy usage is not the only criterion that will make your customers love your app. Your app should be useful. Nobody will start using it just because it looks pretty. People use apps that bring them benefits. 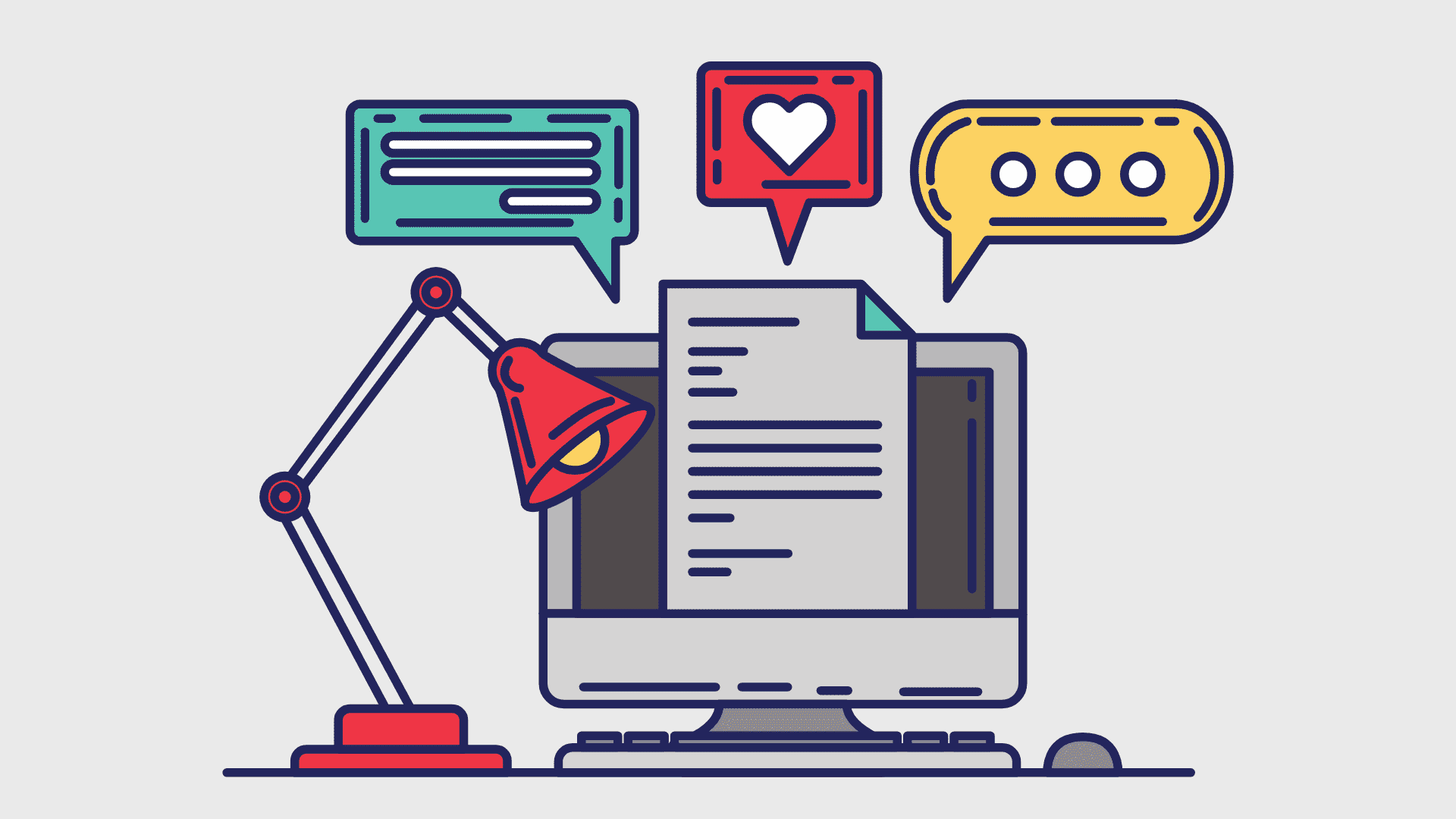 We believe that a very simplified version of the success of your app should look the following way:

Of course, it may turn out that this is much easier said than done. However, let us provide you with a real case for your inspiration.

One of the brightest examples of such a corporate app that not only performs the role of a promotional tool but also represents a value for clients is Shell which is available for Android and iOS. (Just a quick reminder: Shell is a group of energy and petrochemical companies which also own a vast network of filling stations.)

The company not only offers its loyalty program via an app but also offers an easier way to pay for its products and services, shares its latest news and discounts, and lets users easily find a Shell station wherever they are. Moreover, via an app, it is possible to speed, accelerate and break while driving to even receive points for careful driving.

Of course, this is just one example. But we are sure that your company also has things to offer your target audience, right?

So the main thing that you should always bear in mind before the development of an app for your clients (or staff) is the goal of the app. You should always have a clear understanding of how your app will facilitate the life of its users. Then it will have a much higher chance of success.

As you can see, the market of mobile apps is actively developing, as well as the technologies that make apps’ performance even better and their functionality even wider. For a business to stay afloat, it is important to consider developing its own app to serve as a bridge between it and its customers.

The only question is to identify which type of app is the most feasible choice. However, if you have any doubts, you can always rely on professionals who can help you come to the right decision. We are always open to your ideas and we are ready to create an advanced product based on your requirements.

Need our assistance? We would be happy to provide you with it 😉.